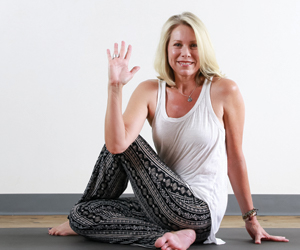 Gina’s yoga journey began fairly recently. As a stay at home mom in San Clemente, she was an avid runner, but a knee injury forced her to stop. Her physical therapist recommended yoga, so she joined a local gym that offered a variety classes. She had no idea what she was doing, but she enjoyed the classes well enough to keep going and soon her knee pain was gone.

A move to a small cow town north of San Francisco gave her one option to keep practicing; Yoga Hell – a Birkram Studio. Not realizing there was a difference between heated vinyasa and Bikram, she nearly died in that first class. But she kept going back and surprised herself at how flexible and strong she was becoming. Her teachers were incredibly encouraging, her fellow students infinitely inspiring and she found that she was not only loving the physical challenge of the poses, but the mental challenge as well.

In 2015 her family relocated to Carlsbad. She chose Peace, Love and Yoga mostly because it was close to her house and she liked the name, but she immediately realized she had found the perfect studio for her. She completed her 200 Hour RYI Teacher Training through PLAY in 2016 and recently competed the Mentorship Program with Monique Cornfield.

Gina truly believes that yoga is for every body and if she can do it anyone can. She hopes that anyone that attends her class will supported, encouraged and inspired.